The Ars Panicalensis and the Museum of Tulle of Panicale 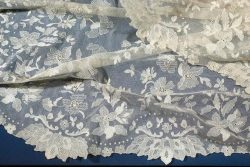 Every historical town has its own local, traditional handicraft that is preserved and passed on from generation to generation, like pottery, iron and wood. Panicale still preserves something more delicate and female oriented; the art of embroidery on tulle with the name of Ars Panicalensis.

The weaving of tulle spread from the early 1800s thanks to the improving of mechanic looms, the evolution of the technique of lace with needle and thread made of cotton or silk. The nuns of the convent of the Collegio delle Vergini and their pupils already practiced embroidery up to the the year 1872, when the convent was shut down.

It was then in the 1930s, when a resident of Panicale whose name was Anita Belleschi Grifoni wanted to bring this tradition back to life, improving the art of weaving, simplifying stitches and introducing more elaborate patterns. Anita Grifoni believed in the economic and social power of this art; for this reason, she founded a real embroidery school. She also created the brand Ars Panicalensis that soon became popular all over the world. Her intuition was right, since the year 1936 her school started to cooperate with the ENAPI (Ente Nazionale per l’Artigianato e le Piccole Imprese/ Public Authority for handicraft and small enterprises), getting in touch with artists who created original designs and patterns. Her school was a real success! The “Ars Panicalensis” became prestigious and counted among his customers royal names and families, such as the Savoia family and the Princes of Torlonia. Apart from its mere commercial aspect, the school’s main purpose was to help women be independent and socially emancipated. The Ars Panicalensis has survived the death of its founder Grifoni and the closing of the school; Even if the school is closed, a group of embroiderers has kept the tradition alive up to now. A collection of items manufactured by Anita Belleschi Grifoni and her pupils can be admired at the Museum of Tulle in Panicale, in the church of Saint Augustine, Square Regina Margherita. The museum, opened in 2001 has a collection of private embroidered items that belonged to families who had previously bought them and then donated to the museum. Since 2013 the Municipality of Panicale together with the GAL Trasimeno-Orvietano has organised a new event with the purpose of promoting the “Ars panicalensis”, FILI IN TRAMA that takes place every year in September. It is a great occasion for exhibitors and embroiderers from all over Italy and the whole world who meet and organize exhibitions, workshop, shows and book presentations.

If you want to discover the museum, then reserve a guided tour following the link here below:

Panicale between history and nature

WHATEVER YOUR DESIRE OR PASSION IS, YOU CAN CREATE A UNIQUE EXPERIENCE WITH US.